Local lore identified our people as Turks of Moorish decent who had escaped from pirate ships off the coast.  This seemed to explain our ethnicity, being neither white nor African American.  But this explanation did not fit with some of the undisputed facts that we did know about our people. General Thomas Sumter recruited Joseph Benenhaley and John Scott to fight with him in the Revolutionary War; Benenhaley as a scout and Scott as a bugler.   After the war, General Sumter allowed the Benenhaleys, Buckners, Oxendines, Scotts and Ray families to live on his land in Statesburg. 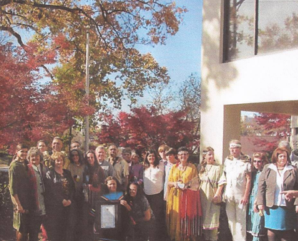 Our people have lived for over 250 years in a community outside of Sumter, SC.  For most of this time,  we, the Benenhaleys, Rays, Buckners, Lowerys, Oxendines, Scotts, and Hoods, have been known as the "Turk" community.  We were set apart from both the white and the African American communities; neither one nor the other.  We had our own school, our own church.  We were a people apart.  Marriages were within the community.  It wasn't until the 1940's when Shaw Air Force Base was built that many ventured outside the community.

The tireless efforts of dedicated members of ourTribe are

rewarded when the state of South Carolina

The Sumter Tribe of Cheraw Indians.

of the Cheraw Indians

at the SC Commission for Minority Affairs

Members of the Sumter Tribe of Cheraw Indians are descended from seven interconnected lines dating back to the late 1790's and early 1800's as documented in Census Records.

Documentation contained in the Tribe's petition for State Recognition notes the head of each family clan to be "Indian", "Turk", "free person of color", and/or "mulatto".  The Oxendine family is documented as "free persons of color" in the 1800, 1810, and 1820 Census Records; as "mulatto" in the 1850 and  1879 Census Records of Sumter County with Charles Oxendine and other members of the Oxendine family being identified as "indian" from Robeson County, North Carolina.  This line connects back to the Lumbee Tribe of North Carolina in the 1800's.

The Benenhaley family was identified as "free person of color" in the 1820 Census Records and as "mulatto" in the 1850 Census Records.  This family and others of this tribe have been known in the surrounding community as "Turks" throughout history to modern day (i.e. "History of the Turks Who Live in sumter County, SC-From 1805-1970".  Additionally, this line has also been associated with the leadership of the communitiy with Julius Benenhaley referred to as the Head Man or Clan Leader in the 1960's.  In 1972, Mr. Julius Benenhaley identified the community as Native American Indian during interviews with the City of Sumter and the University of South Carolina.

The Ray family is documented on the 1850 and 1870 Census as "mulatto", living in Sumter County.

The Buckner family are documented in the 1800 Census and the 1870 Census as "mulatto"/"indian" working on farms and other trades.

The Hood family is documented as "turk" in the 1900's through court records.

The Woodell family is documented through Census and other historical documents as marrying into this Community.